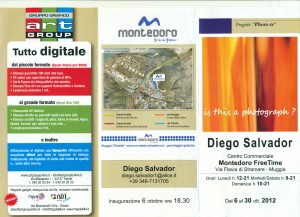 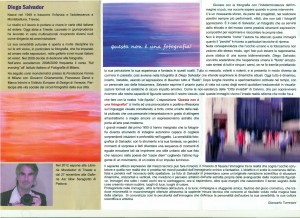 This is not a photograph !
Playing with the photograph with the vagueness of the image you can, but you need to know when and how to operate. There is an unremitting effort on the part of designers in achieving lens ever more efficient, sharp , that not all photographers appreciate . It is the case of Diego Salvador, a photographer who knows how to use the fuzzy and blurred as valuable, compositional and expressive tools to tell his own ideas. It is not important as the author has obtained these images but why he used particular techniques of shooting . Considering that the human eye and the camera does not see in the same way, each photo can be the representation of a static two-dimensional scene . Diego Salvador, firm believer that human experience is fluid emotional synthesis of all five senses, acts as an intermediary projecting his perception, his experience and imagination in these shots. Everything is mixed, like it or not, and is presented in a different way from how it was in the past; so it is in the photograph of Diego Salvador who wants to represent the current dynamics. Today everything is dynamic , uncertain , unstable, using an expression of Bauman all it is “fluid”. After extensive researches and experimentations grown over time, with personal use of the camera , Salvador expresses his point of view on the course of daily events and translating them into formal and aesthetic views of sure emotional impact. As the non-existence of Calvino ‘s Invisible Cities , which to survive, need our ability to configure them according to our experience, so these images live the unreal reality of today that has much to do with our “liquid life”. The exhibition “this is not a photograph !” invites us to reflect on the positive and provocative visual language considered , wrongly, as an art of reality rather than a personal interpretation able to draw to abstract art, or even better abstract expressionism that leads up to post-modern art .
The great masters of the first 900 have taught us that the photograph becomes an instrument of self- investigation capable of capturing amazing insights and depth in the subject. The photographic sensitivity of Salvador , with the instrument and his imagination , is able to manage the moments of surprise and turn them into a sequence of equal moments of emotion in such a way as to give unity to his photos that arise in the “carpe diem” poem capturing the fleeting moment of a movement , of a color of a light pulse .
The wise use of the technical means of expression can work miracles , the miracle to fix the image of the reality that captures the inquisitive eye and the non- reality that propels us into the parallel worlds of the dreamy and fantastic imagination. The lens reveals the artist’s consciousness and penetrates into the unconscious of the viewer. The pictures of Salvador are presented as an original narrative of scientific dynamic situations, horizontal and vertical, which invade the artistic thought of abstract art of the avant-garde of figurative modernity. Images that under our eyes now contracting, now expanding, over those margins that hide the secret meaning of things by creating sublime visions, light places, places of color.
The protagonist in the images, besides the author’s imagination, is light, companion and elusive friend, an advocate of the play of colors, which translates micro-reality in micro-images obtained through the skillful technical measure that contributes to the desired result in the magical stage of printing. Hence It is realized the peculiarity of the image that defines the author’s personality, his sensitivity, his artistic and scientific culture.
Giancarlo Torresani