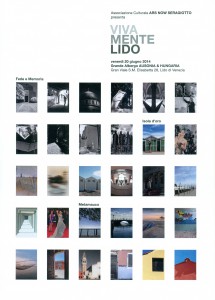 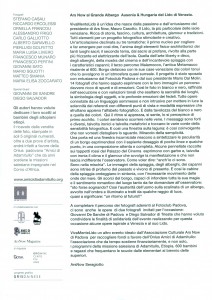 VivaMenteLido is an idea born from the passion and the enthusiasm of the President of Ars Now , Mauro Casotto. The Lido , the more particular among the Venetian islands . Rich in history, charm , culture, architecture , glamour and tradition. All elements for a stimulating and creative photographic project. A project declined on three significant issues: the first nucleus to seize and bring out as to say, the soul of the physical and architectural elements of the holy places;
the second theme , from the sacred to the profane , addressed to the most exciting and electrifying area of the island. That of the art nouveau and dèco architecture, of the hotels, of the cinema exhibition and of the enchanting beach with the characteristic bathing-huts;
finally Malamocco : the old Metamauco dating back to 600 . The charming village characterized by venetian houses decorated by soft colors that surround it in an atmosphere almost surreal.

The project was married with enthusiasm by the Photo Club of Padua and by its President Mario Dal Molin. 14 photographers were able to interpret and express through their images a path full of ideas and emotions.
So the photos in black and white , refined regarding the performance and with tonal variations having the aim to exalt the sacredness of the places, the symbolism of the objects, and the deep emotions of the faithful. A language soft , non-intrusive direct to enhance the expressiveness of gestures and of the architectural lines and not only . Works that emphasize the solemnity of the referents through different points of view , multiple camera angles and modes of expression that fully exploit the photographic alphabet . And from the palette of black and white to that of the colors . Here the pace is appreciated , feels , one perceives it at first sight. The colors seem to flow in the veins . The messages are strong and diverse, sometimes ironic and sometimes metaphorical and touch the strings of the various photographic scale . And so a window on the lagoon is so enthralling that you would not want to abandon your look. Miracle of simplicity. A door and a window framed are able to synthesize the characteristics of a village speaking with the erudite mix of a few lines and some point , in a careful and complete composition . Some brush-strokes on the red carpets of the Palazzo del Cinema with gracefully and sometimes with irony , are able to express the climate, and transmit the glamour that surrounds the event and does not leave the observer indifferent . Express involvement , as saying: ” Here I’m, too . I’m in the fray . ” The images of the beach , of the hotels and of the bathing-huts are imbued with the scent of the past and live the present. And so the bathing-huts of the beach sway in close harmony with the waves of the sea. Finally the images with the glimpses of the village that are able to infuse all the enchantment and transmit the romantic feeling so much as to ask the observer: ” am I dreaming? ” In the same time enigmatic looks the photographic interpretation of the austere man on the steps of a stately hotel shrouded in the shadows and caressed by some splash of light beam , as if to say :” back to the future!! .”

To complete the route of the Photographers of Foto Club – Padova, there are the works of two photographers invited as guests: Giavanni De Sandre of Padua and Diego Salvador of Trieste who wished to share the purposes of solidarity of this event and have produced, for this occasion some works inspired to Venice and its Lido.

VivaMenteLido is a further event created with the purpose of solidarity to raise funds for Amici di Adamitullo Onlus : the association that provides financial support for a long time , and not only that, the programs of the Salesian mission of Adamitullo , Ethiopia . 600 children and boys attending primary and secondary schools and, starting from this year also the first two years of high school.
AersNow Seragiotto